Havana, Illinois, named for the city of Havana, Cuba, is located on the east shore of the Illinois River. Havana is principally an agricultural area, and at one time was an important inland port for freshwater fish.

Major Ossian M. Ross of Seneca County, New York was an officer in the War of 1812. In the early 1820s, he migrated to Illinois by way of the Ohio, Mississippi and Illinois Rivers. Ross first obtained land in the Military Tract across the Illinois River from Havana in Fulton County, Illinois and founded the town of Lewistown.

Ossian Ross established a canoe ferry across the river at Havana. This is believed to be the first business enterprise in Havana. The closest ferries were approximately 50 miles away at Peoria and Beardstown. Ross also erected the first hotel in the area in 1829. Abraham Lincoln, John J. Harris, E. D. Baker, H. M. Weed, W.C. Goudy, and John P. Boice attended court sessions that were held in the hotel.

Photographs, receipts, and advertisiements relating to Havana’s businesses are included in the collection presented here. 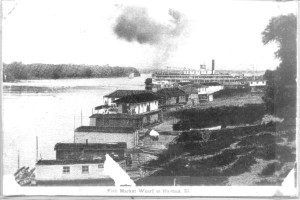 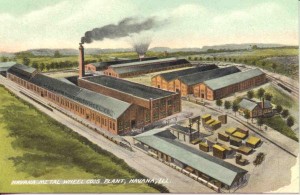